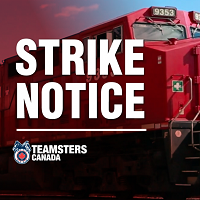 Sisters and Brothers: As you are now aware, the results of the Company’s Final Offer were received from The Canadian Industrial Relations Board regarding the Members decision to REJECT at an astounding 98.1%. Following the release of these results, your Bargaining Committee then met with the Company, including CEO Keith Creel, throughout the day until late last evening.

The meetings were not as successful as we had hoped, and there remain significant outstanding issues. Notwithstanding the 98.1% rejection, the Company fails to appreciate the significance of our Members’ resolve. We are further working closely and communicating with our Sisters and Brothers in the IBEW (International Brotherhood of Electrical Workers), as they are in the same situation as the TCRC with their bargaining with CP.

Today, both TCRC and IBEW Bargaining Committees have served written notice to the Company advising that in the event there is not a negotiated settlement between the parties, the earliest both Unions could go on strike is Tuesday, May 29 at 2200 EDT.

Your Bargaining Committee remains committed to continue negotiating with the Company up until that point and beyond should they wish to do so. However, every Division should now make the necessary preparations to begin legal strike action on Tuesday, May 29 at 2200 EDT.

We will provide further information and updates as soon as they become available.